Make the move from Melbourne to Geelong seamless with WridgWays

Get a quick quote for local removalists

Let us know a bit more about your move for a quick quote from WridgWays.
Let's go
HomeLocal Removalist
Melbourne to Geelong

We can make your next move smooth

Geelong and the surrounding Bellarine Peninsula is a haven to be discovered, a mere hour away from Melbourne. If you are making the move away from Melbourne to this beachside city you are in for a real treat. Not only is Geelong home to wonderful beaches and natural beauty, but there are also plenty of cafes, restaurants and bars to explore and enjoy. Moving from Melbourne to Geelong has never been easier when you choose to move with WridgWays.

Geelong has long been a favourite holiday destination for Melbourne daytrippers and folk from further afield as well. The stunning Geelong waterfront walk is the place to be on a sunny afternoon, and you will love spending your weekends exploring Geelong's many beaches - including Eastern Beach, Rippleside Geelong, and North Shore (also known as Moorpanyal Beach). Geelong is also close to Queenscliffe, Barwon Heads, Torquay, and Bells Beach, which means that you can head out and explore some new territory by simply taking a short drive.

When choosing to make the move to Geelong you are embracing a new way of life that will revolve around enjoying the outdoors, and making the most of your new beachside location. You will not have to contend with the Melbourne traffic — although if you are choosing to commute into Melbourne, Geelong has a train line that goes straight into town in an hour and a half. You will have time to get really into a book or catch up on some work as you enjoy the ride. 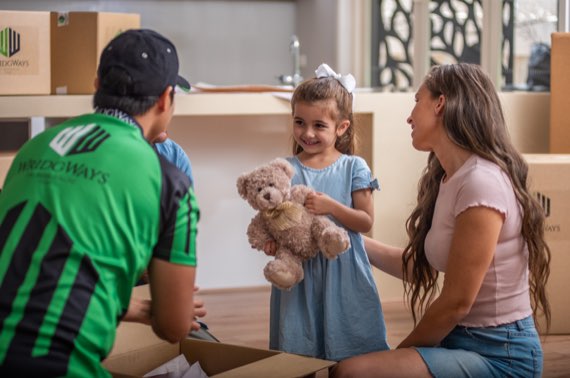 Moving with WridgWays is a surefire way to get off on the right foot. As far as removalists go, we have the experience and commitment to ensure that your move will go smoothly. We have over 125 years' experience moving homes and businesses to locations within Australia and around the world and are relied upon to move precious possessions — whether it's down the road or across the country.

Ensure your move is taken care of from start to finish by choosing WridgWays. We know that moving isn't just packing everything up and shifting it - there is so much more that goes into every move. That is why we offer a full suite of complementary services such as insurance, cleaning of your existing home, pet transport, and even utility connection.

These guys are superstars. Couldn't be happier with how our move went. Crew packed & delivered the whole house same day. The crew were both friendly and professional with nothing being too much trouble. Excellent job!

Wonderful, helpful & patient customer service on the phone when organising our move. Prompt, professional & careful movers during packing and loading the container. I can't say enough about what a great job they all did.

The WridgWays staff were courteous and professional, from the office consultants to the moving team. I was put immediately at ease with the quiet efficiency and confidence that you find with a company that has been doing it for some time.
See all Google reviews

Our committed team of experts will ensure you are 100% satisfied with our service — whether it's packing your home up, transporting your belongings with care, or unpacking it all at your new home.

Frequent and friendly communication is at core of the customer service we provide.

We move all your possessions with the care and consideration they deserve.

We are an Australian owned and operated company with a global network.

We are supported by industry-leading logistics technology to ensure every move is smooth.

We are proud to have Australia's most efficient fleet of moving trucks.

We have facilities across Australia, and each includes offices, secure storage, and truck depots.

Get advice for your upcoming move from Melbourne to Geelong

We are happy to answer any questions about our removalist services — just get in touch!

WridgWays has a long and storied history of innovation in the removals industry. Since our beginning in 1892, we have always pioneered new services and practices to become the most trusted name in removals.

We have trucks and employees across all States and Territories, including regional areas, and our team has helped millions of people move nationally and around the world. We're your moving specialists.

Will the move to Geelong take long?

Geelong is only an hour away from Melbourne by road (an hour and a half if the traffic isn't great) which means that transporting your items will not take long at all! Packing up your belongings is a process that may take up to a day, depending on how much you have to move, and the unloading process on the other end may take up to a day again.

We aim to provide you with a full quote and estimate of your move and provide this to you prior to your move taking place. That way you can plan around your move and ensure you have everything lined up and ready to go with minimum downtime.

What can you take on the moving trucks to Geelong?

Our moving trucks are big enough to take even the largest of household items - but when it comes to moving there are some things we simply cannot bring. This includes anything that is a hazard to you or to our drivers, which is things like chemicals (such as pool chemicals, gardening chemicals, and even paints and oils), explosives or ammunition, firearms, and anything that may be a fire hazard.

We do not want anything to compromise the safety of your household items, which is why some things cannot come on our trucks. Call our customer care team on if you would like to discuss any items that you think we may not be able to bring.

Can you move my pet to Geelong for me?

We take care of pets like they are royalty, and even on a short move from Melbourne to Geelong we promise to pamper your pet and leave them feeling secure the whole journey. Moving can be stressful for pets (just like it can be for their owners!) which is why we make sure that every pet is treated with kindness, dignity, and respect when we are moving them.

Can you move me from Mornington Peninsula or further away?

We can move you from anywhere in Melbourne — or even further — so no matter where you are in Melbourne you can be sure that the WridgWays team can take care of you. If you would like to know more about where you can move from — please call our customer care team to speak to our friendly staff about your upcoming move to Geelong. We are happy to help you start your new life in Geelong!

Fill in the form below to receive a quick quote

Read about it
Moving home
By
WridgWays

Read about it
Moving local
By
WridgWays